The Young Musician Music Institute offers cello lessons from beginner to advanced levels. Our cello teachers can guide you in many genres such as classical, pop, rock, or even jazz! Our teachers hold high academic credentials and are veterans in the performance and teaching field.

As a beginner, our teachers will introduce you to the instrument, the bow-holding techniques, proper finger positioning, sight reading and rudiments of music. Intermediate and advanced students will move on to more advanced techniques such as vibrato and harmonics and master further repertoire. Our cello lessons also include theory & ear training.

The Cello is a bowed (and occasionally plucked) string instrument of the violin family. Played by a cellist or violoncellist, it enjoys a large solo repertoire with and without accompaniment, as well as numerous concerti.

The cello often plays the bass part, both in chamber music such as string quartets and the orchestra’s string section, where the cello may be reinforced an octave lower by the double basses.

Around 1700, Italian players popularized the cello in northern Europe. The cello is most closely associated with European classical music. The instrument is a part of the standard orchestra, as part of the string section, and is the bass voice of the string quartet (although many composers give it a melodic role as well), as well as being part of many other chamber groups. 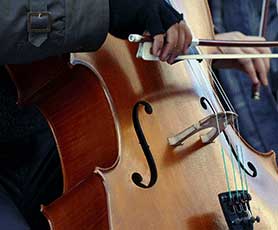