Our keyboard lessons are different from conventional one-on-one piano lessons that students have more fun and frolic while grooving to their favorite songs. Keyboard can provide complete backing tracks for any song to play along and that gives the students instant enjoyment & precision.

At The Young Musician Music Institute, our keyboard teachers make them fall in love with their lessons while playing their favourite songs. At the same time, our teachers infuse music concepts like finger posture, dynamics, articulations and improvisational skills. As the students progress, they are also provided with band rehearsal options to play live gigs with a complete band.

Our prime viewpoint is that performance-based music education is the best way for students to gain musical expertise and all our lessons incorporate a performance aspect! As our students advance through their keyboard lessons, they are ready for our performance master classes.

The term ‘Keyboard’ refers to any instrument which has a ‘Keybed’ & an active electronic circuitry to produce the sound, which includes Synthesizers, Digital Pianos, Stage Pianos, Electronic Organs etc.

Keyboards are capable of recreating a wide range of other instrument sounds. They have been integrated into most forms of modern day musical styles from the early 1960’s. Most versatile keyboard players include Rick Wakeman, Jon Lord, Chick Corea, Richard Wright, Thomas Dolby, Jordan Rudess etc. 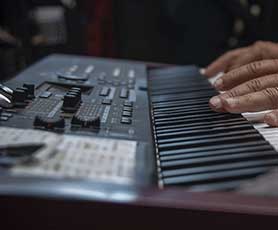