Our saxophone lessons are aimed at the contemporary and modern musical styles and applications of the instrument. The lessons are handled by actively performing musicians, so you are learning from the best in the field.

At our music school, saxophone teachers have vast experience in performing and teaching, so your dreams of playing saxophone in a school band, rock band or a jazz ensemble can be realised sooner than you think!

The saxophone (called colloquially as the ‘Sax’) is a family of woodwind instruments usually made of brass and played with a single-reed mouthpiece.

The saxophone is used in classical music, military bands, marching bands, jazz (such as big bands and jazz combos), and contemporary music.

The saxophone is also used as a solo and melody instrument or as a member of a horn section in some styles of rock and roll and popular music. Saxophone was invented by the Belgian instrument maker Adolphe Sax in the early 1840s.

In the 1840s and 1850s, Sax’s invention gained use in small classical ensembles (both all-saxophone and mixed), as a solo instrument, and in French and British military bands. After an early period of interest and support from classical music communities in Europe, their interest in the instrument waned in the late nineteenth century.

While the saxophone remained as a novelty instrument in the classical music world, many new musical niches were established for it during the early decades of the twentieth century. Its early use in Vaudeville and ragtime bands around the turn of the century laid the groundwork for its use in dance orchestras and eventually jazz and later into rock and pop music. Most versatile proponents include Charlie Parker, John Coltrane, Sonny Rollins, Stan Getz, Wayne Shorter, David Sanborn, Branford Marsalis etc. 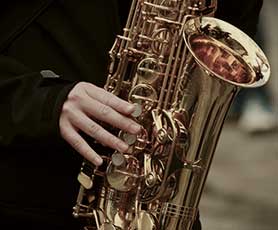