Ukulele is a relatively easy instrument for children to learn. It is gentle on their fingers and our ukulele lessons are designed to be fun and the students will be strumming their first song after a few lessons! At The Young Musician Music Institute, our ukulele teachers make the lessons simple & fun so that the students enjoy the lessons and keep themselves musically motivated.

Learning a ukulele can fire up the passion in you to learn more challenging instruments in the same family such as guitar, mandolin or banjo.

The ukulele is a member of the lute family of instruments. It generally employs four nylon strings. The ukulele originated in the 19th century as a Hawaiian adaptation of the Portuguese ‘Machete’, a small guitar-like instrument, which was introduced to Hawaii by Portuguese immigrants. 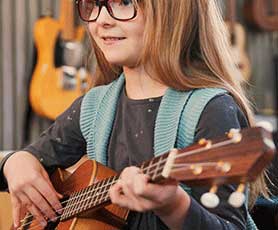