Exploring the Music Genre of Heavy Metal for Modern Societies

If you’ve heard the “Master of Puppets” by Metallica or “Communication Breakdown” by Led Zeppelin, you already know what we’re talking about. Heavy metal is a rock music genre that became popular in the UK and the US in the 1960s. Experts claim it was that moment in the history of music when musicians began experimenting with harsher guitar tones and louder musical progressions. What began with the distorted chords of the Kinks in 1964 was gradually advanced into more experimental songs like AC/DC’s heavy metal album Back in Black, which the Guardian claims is a “high watermark of the genre”. While heavy metal continues to be a popular genre, it has developed a few known off-shoots. These include:

Most heavy metal songs are characterized by harsh, coarser lyrics. The music involves a few core elements, including distorted guitar segments, aggressive drumming, low-range bass, and rough vocals. Considered pioneers of heavy metal music, musicians of the Black Sabbath have testified to being inspired by the inspirational music of Vivaldi and Bach.

As the genre transcended into the 1970s and 1980s, it became associated with calculated aggression and incredible speed. Bands like Judas Priest became popular. The music they produced was louder, faster, and more aggressive. Clive Burr, the drummer for Iron Maiden, is credited with pushing the boundaries of metallic drumming further with their 1980s hits.

Following the legacy of Clive Burr, Chris Adler added more enthusiasm to the entire genre. Not only did he add creativity and speed to his craft of drumming, but his craft was also aesthetic and ever more relevant to his age.

Interested in learning the drum? Begin by buying yourself a drum kit! Drums lessons at music institutes focus on drumming inspired by Rock, Jazz, Country, and Reggae. Our music school in Abu Dhabi offers a range of music courses for music enthusiasts. Explore our website to learn more about our courses and programs. Guitar lessons at a young age can help you understand the craft better. If heavy metal interests you, learn to use the electric guitar at a professional music school.

Despite the severe aggression that the genre exudes, heavy metal continues to be one of the most commercially successful genres of today. The question here is what makes heavy metal this appealing to modern societies.

It’s generally believed that loud and disturbing music can cause headaches and nausea and could lead to listeners developing anxiety and stress. The assumption is not true. According to the Guardian, heavy metal music calms down the brain and reduces negative emotions.

Sadness and low feelings have permeated people’s lives in modern societies. Individuals have huge responsibilities to bear and hardly any time to self-reflect upon the drudgery of life. Extreme music like hard metal and screamo talk about life at its rawest. The genres support unfiltered honesty in expression unsupported in modern communities and cultures.

How often do you find yourself sitting in silence, contemplating the boring, everyday routine of livelihood? Most upset people don’t find enough time to explore the gamut of their emotions in their entirety.

These include work issues and health problems relationship issues. Heavy metal helps address this pent-up anger as a collective issue in society.

There’s no denying music’s capacity to address the range of emotions. Music certificate course help with excelling the music theory.

A Sense of Community

Fans of heavy metal music, also known as metalheads, seem to be one of the most loyal music communities. Spotify discovered the same about metalheads. Most heavy metal lovers insist all music genres are pale in front of heavy metal. According to the data Spotify has released within the past few years, heavy metal seemed to be ruling the roost with a rock-steady number of followers. Most heavy metal singers write their songs. These songs come from a place of realistic pessimism deep-rooted in the harsh everyday realities of life. The music produced is rough but structured enough for the audience to relate to and understand. Speed is another factor that shouldn’t go unnoticed in heavy metal numbers. Most heavy metal solos and performances host a charged crowd. The performers have to be super sure their music is as authentic as their audience.

In the modern world, who doesn’t have trust issues. Heavy metal is a genre for highly skeptical societies that fail to trust at the earliest and continue in sheer obliviousness. The music reflects the tumult of the age and dares its audience to navigate it. No wonder heavy metal continues to be one of the most influential genres.

Rock and pop graded exam courses expose students to some of the leading musical genres and musical instruments of our times. The institute offers rock and pop exams for bass, keyboard, guitar, and drums.

For piano classes and singing lessons, get in touch with The Young Musician Music Institute. Located at Al Raha Mall and Al Wahda Mall in Abu Dhabi, The Young Musician Music institute is affiliated with Trinity College, London. Our courses entertain toddlers and adults. The curriculum includes beginner’s courses, diploma courses for performers, and performance masterclasses. 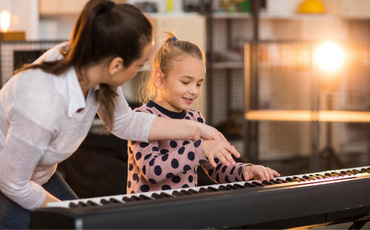 Modern music education has evolved a great deal over time. The landscape of music teaching and education has changed greatly in the past few decades. Find out more about it here.